It was the flock of birds that did it, silhouetted against the sunset, wheeling over the lake, spiraling as if drawn by the gravitational force of something huge in the air, hovering unseen. Evening is often a melancholy time for me, but while driving home on Highway 20 just outside Clearlake Oaks, the movement of the bird flock spiraling around that unseen center made me acutely aware that I was going home to a house empty of everything except cats, gods, and furniture. And this phrase rang through my mind, “the illusion of someone at home.”

Or maybe I can blame this mood on E.B. White, who could have set me up for this. While chowing down on Thai eggplant (spicy) and jasmine rice, I was snickering to myself over a collection of essays in an ancient volume titled One Man’s Meat, particularly his essay, “Clear Days.” But tucked in among the mirthful elements White writes as a city slicker self-exiled to rural Maine during World War II. He fit in with the hearty locals who hunted, fished and farmed about as well as I do here in Lake County. At least he had a wife, child, a *turkey and quite a few chickens.

“It is not likely that a person who changes his pursuits will ever succeed in taking on the character or the appearance of the new man, however much he would like to. I am farming, to a small degree and for my own amusement, but it is a cheap imitation of the real thing.” (E.B. White, One Man’s Meat, Harper & Brothers, New York, 1950, p. 21.)

Is this evening’s melancholy a reaction of anti-climax? For the last three months I’ve focused intently on (1) developing a consistent spiritual/devotional/magical practice and (2) creating and dedicating the first incarnation of the “Lokabrenna Tiny Temple.” (The dedication took place earlier today.) So when I decided early this evening to take myself out to dinner at the Chinese/Thai restaurant three miles down the road, I did it partially to reward myself. I usually don’t mind eating alone as long as I have a book. Sure, everyone looks when I arrive alone and am seated (alone!), but I soon cease to be interesting. I’m too old to be worth much attention. My Jezebel days are over.

I usually order my main course, tea (either hot green tea or Thai iced tea) and a “to go” order of pork satay with peanut sauce to enjoy later. That “to go” order puts a different spin on my situation. Now I look like a woman who may have gotten away for a little while (to save her sanity?) but who has promised to bring something good back to a someone who is waiting for her return. I can’t deny that I kind of like this faux conjugal narrative.

Life after divorce, which now also includes life after breaking up with the lover who disrupted the marriage, does take some getting used to. One could argue that I brought it on myself–and that I made bad choices that now result in my present loneliness. However, I wasn’t in this pickle all on my own, but I decline to diss the gentlemen involved. In a ridiculous way, I still love them both. 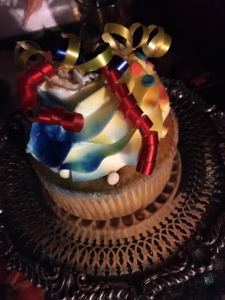 I noticed yesterday that I enacted another bit of faux conjugality at the grocery store. It wasn’t an intentional deception but when I bought that bottle of cinnamon-flavored whiskey for Loki, along with a gift bag to hold it and a very large cupcake that looked like a cheerful but modest birthday treat, it looked as if I would soon be celebrating something or other with a (human) friend or partner. To that young man behind me in line, who asked what the whiskey tasted like, I said truthfully that I had no idea, that I was buying it for someone else. I refrained from saying who.

I am not sure what to do with these thoughts and feelings, except to endure them. I certainly do not think that my devotional practices and magical fervor are ill-placed or directed at an illusion. My “most trusted” patron deity, Loki, feels very “real” to me in terms of a specific “energy” that I sense (sometimes more distinctly than at other times) but I do wish that there was also a human recipient in my life. Without the center of family (husband and children) I feel as if I am whirling into the gravitational vortex of an unknown realm, and that if I stopped flapping my wings in hopes of escaping this fate, I would instead drop like a rock into chilly waters below.

It’s these between-times that are so tough to take…these liminal spaces of waiting, not knowing…of becoming but never “arriving”…of not belonging completely to any one place or group… But wait! That’s Loki’s turf and apparently, it’s also mine…

*I have turkeys too–a wild flock strolls almost daily through my property.