When I was little, I could get lost in the rain, the waves, the sparkle of dew on the park’s grassy lawn. Snorkeling in La Jolla Cove brought me face to face with moray eels and the neon-bright children of garibaldi, California’s state fish. Sunrises and sunsets, and that sad time before both, were numinous moments for me. Anything that emerged from the fog was…magic!

And then I grew away from all that, reaching instead toward that which seemed bright and glittering and adult. And then later, all that which was in reality tarnished, ironic, and dystopian. I drew strange pictures in pen and ink, created costumes of vinyl and electrical tape, and always dreamt vividly.

Later, as a new wife and mother, the immense mystery of gestation, birth, and the unfolding of child spirit and development consumed my interest. Nothing has ever been as remarkable and humbling as this. And I worked with a will at the (usually thankless) household and parenting tasks in spite of my chronic illnesses. And I tried to bring “magic” into my children’s lives through books and special occasions.

My own longing for a sacred homeland of imagination and spirit remained. By the time I hit my early 40s, all of these submerged capacities and longings for sacred experience came busting out in a series of absurd spiritual epiphanies. I’ve written about some of them elsewhere (here and here). Some, like my Hawaiian experiences, I haven’t chronicled yet.

Today, December 15th, is actually the second anniversary of my final divorce decree. I bring that up because my marriage was so very “secular” and when the spiritual stuff came bashing through, I was embarrassed to confide in my husband. And when I finally did, well, we just didn’t understand each other anymore. I tried at one point to engage him with tantra. That was a huge failure. The rift worsened. Neither of us was capable of mending what we’d once had.

For a long time, Hawai’i was a spiritual beacon for me. That’s because those islands are so alive (so conversational!) and what remains of the cultural traditions are so wise. But while I was attempting to be true to the astonishing things and connections that happened to me there, I was also aware of how alien I was to the place. I still don’t know why I went through what I did in Hawai’i instead of having some Celtic or Norse deity call me home. But I do know that my contact with the Hawaiian islands (mostly Maui and Hawai’i Island) brought out my full desire to live daily in a sense of the sacred, to cultivate practices and relationships which would be grounding and numinous. I tried a lot of things to try to get to that place.

Once my marriage was truly over, and the paperwork was filed with a judge, I moved to Hawai’i island, Moku o Keawe, for nineteen months. Unknowingly, I moved to an area that used to be known for fearsome sorcery. The island kicked my`okole and though I tried to stay pono (appropriate, balanced) there, I was in reality a’ole pono (off balance) pretty much the whole time. I was surprised by this, as I’d prayed for years and asked permission to move there. I thought I had been granted that permission, finally, or I wouldn’t have gone. (So maybe this was a case of spirit saying, “Yeah, sure. Come on over–and then we’ll kick your ass back to California!).

I was immensely homesick for my children. I developed pervasive social anxiety. I was diagnosed with “adjustment disorder with mixed anxiety and depressed mood.” I was frequently suicidal. And in the midst of all the turmoil (which also included the sad souring of a long-term, long-distance relationship), I was learning some important lessons. The islands were now turning me firmly toward my own ancestors and heritage. The message seemed to be, “Okay, you’ve hung out with us long enough, now go back to your own.” And that’s when I began to seriously study witchery and western magic and create a regular, daily practice of devotion and gratitude.

Finally, I was establishing a daily connection to the sacred. In a way, Hawai’i midwifed this birth for me. Magic was saving my life. 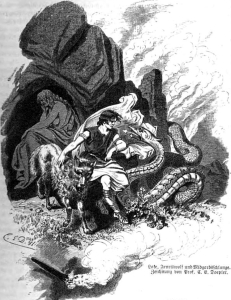 Once back in California, I continued to study magic and also took up the learning and practices of “ancestral medicine” (based on Daniel Foor’s work). I began to explore devotional work with a few Norse deities, first Frey, then Freya and Gerda. (Loki came later.) I also began to acknowledge and make offerings to the local wights and ancestors as a “thank you for letting me be here” practice. (I’m on Pomo land and I know a bit about the brutal history of this place.)

I could never go back to the merely secular life, ever again. Through magic study, mystic experiences, and devotional practices, I’ve been able to bring my child self home and simultaneously face growing old and older, and to view my eventual death in a balanced way. If I ever have another intimate human partner in my life, that person will have to be someone who already shares similar values and approaches to the sacred side of life.

And the close relationships I have with my ancestors, guides, and deities–particularly my patron Loki–will never be neglected or set aside. This is the stuff of life to me now.

2 thoughts on “Sensing the Sacred”