As a solitary practitioner of all kinds of stuff, yesterday’s solstice celebrations were also solitary, as least as far as humans are concerned. 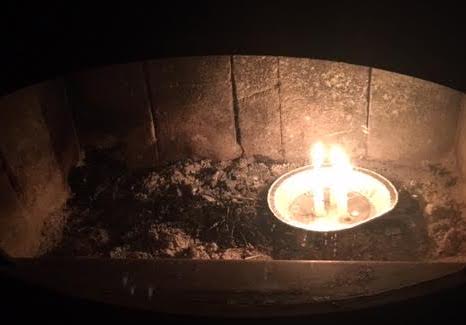 However yesterday I actually had more than my usual quota of real human contact.

(1) I went to the bank to cash a check and had a few light words with the clerk. Sadly, the bank trip also included a massive fragrance exposure from another customer. People really pour it on this time of year. Fortunately, I had my asthma inhalers with me.

(2) I had a quick trip to the grocery store. I let someone go ahead of me in line and exchanged a few words of cheer with the cashier. (Unless I cross paths with a neighbor, this is usually my only form of actual human contact during the week.)

(3) I talked to one of my part-time neighbors about the feral cats I’m feeding. Sadly, her house was scented with candles (or air fresheners) so I didn’t stay long.

(4) Another neighbor and I yelled a few words across the street. Yes, she and her husband are coming to breakfast on Christmas day.

(5) The dishwasher repairman came. A pleasant and efficient person. He was unscented. SUCH a blessing. So many repair people wear heavily scented deodorants.

(6) But the biggest deal was a shared meal at the Clearlake Senior Center. I’d gone there with a friend on Thanksgiving, and though wary of fragrance exposures, thought I’d give it another try since I was in the area (twelve miles from my home). This was an interesting experience for me. I forced myself to smile while filling out the intake form: yes, I eat most of my meals alone, yes health conditions keep me socially isolated… Honestly, I wanted to cry just admitting to that on a piece of paper, but I didn’t. I even stifled my impulse to go to a table by myself and instead asked to sit with an elderly couple who looked friendly enough. And they were.

The food was okay. A modest salad bar, ham, canned green beans tarted up with fresh onions, mashed potatoes, and a macaroni salad and a roll that I couldn’t eat (wheat allergy). Two men also sat at the same table, but they were not people interested in conversing. Mostly the elderly wife and I talked, and sometimes her husband interjected. I learned a bit about their lives (married over seventy years!) and they learned a couple of things about mine. When they were younger, they lived on a bit of land with plenty of fruit trees and a vegetable garden. They were known for sharing their bounty with the senior center and other places. Now, they live in a trailer home and the husband, older, worries about what will happen to his wife when he’s gone. She sat and nervously smiled. Her fingers were tangled with arthritis. She was still pretty. Married at sixteen, she must have been stunning.

What will happen? I wondered. And what will happen to me? I have four cats. If I die alone, they’ll feast on my corpse until I’m found.

The shortest day was starting to feel a lot longer than I’d expected. Back home again, once the dishwater repairman left, I could get busy with Solstice observances.

I swept the floor of the Lokabrenna Tiny Temple and brought a couple small offerings to the altar (a candy cane and a cinnamon stick). I lit candles and sat awhile, enjoying Loki’s donut patterned shower curtain and the view out the front door. Then I shut my eyes and tried to connect with my favorite deity. Meowington, the temple cat, rolled on the floor and soon became bored.

Inside my house, where my main altars are located, I made my weekly offerings to Frey, Freya, and Gerda as well as to Loki. Friday is my usual “all gods” day so that was part of Solstice too.

I also did another bit of meditative “journeying” work with my father’s mother’s lineage, as per the instructions of Daniel Foor (Ancestral Medicine). This is the last of the “first four” lineages I’m working with and the focus shifted from a previous (quite distant) ancestor to one even further back. The idea is to connect with the most recent “truly well” ancestor and to ask their help in healing the more recent generations (while also forming a protective circle or barrier for the living as the work is done). It’s quite a wonderful system. Each lineage I’ve worked with so far has a distinct “flavor.” I honor these ancestral lineages daily with poems and weekly with offerings.

When I began trying to connect with my father’s mother’s line, I had an impression of green hills and standing stones, a landscape which suggested Ireland to me. In that first visioning meditation, I came upon an old woman who emerged from a small, stone hut. She seemed to be a no nonsense type who would flick away “the troubles” with a cleaning rag. She seemed to have a sense of humor based on observing human foibles, but was not a grand visionary (which I foolishly expected the most ancient ancestors to be). She was willing to help, though, and I was grateful for that. I realized also that I am not at ease among “salt of the earth” folks–I am too much of a 20th century (and now 21st century) construct. She made me uneasy because I probably couldn’t dazzle her with fancy words or ideas. She had probably lived her entire life more in the moment than I ever have. I don’t think this is romanticizing her–I think her life had been too busy for idle thoughts.

But yesterday I ended up beyond this old woman, facing a taller, younger woman in a long blue dress. Brigid was the name (though probably not the saint) and she had some affinity with doves. I asked her, as per Foor’s suggestions, “how do you see the world?” and her answer was to spin around, to look at all sides. I felt that she was on a hill or a tower, as there seemed to be a lot of landscape around her as she turned. She wanted an offering of water and also seemed to want an embroidered or beaded hanging of some kind, a small one. She is also willing to help heal the lineage.

And there was a message too about “empty nests” which I associated with the dove. I tried to write a scrap of poetry about this, but failed.

I did an eight card “Winter Solstice Divination” reading which was pretty darned interesting, went outside and looked at the moon, and ended my night with the smallest black cat on my lap, doing my usual thirty minute Loki meditation.

It was a good day for a short day that was far too long. I encountered other human beings. I sat with my sadness. I let the tears flow. I busied myself with writing and a bit of cleaning and cooking. I enjoyed my cats. I did ceremony. Such days, stretching to the end of my life, are not such a bad thing to contemplate though I yearn for so much more.

3 thoughts on “So. The Solstice Happened.”