Last year felt at times like “a mad scramble for a place in this chamber, in this meagre palace of Midgard” (to quote a certain actor playing a certain god). My personal, professional, familial, financial, and creative foundations were all challenged–and in some cases demolished–and I was frequently in despair. Lonely too. Such suffering! And yet 2018 was also a most fortunate year because I “met” the most compelling and interesting supernatural being I’d ever imagined. Naturally (being a Scorpio), I was quick to oath myself–sort of like having a Vegas wedding with someone I’d only met that weekend–but have absolutely no regrets. I also took on several spiritual challenges to prove my own mettle to myself, including making the Lokabrenna Tiny Temple.

However, I’ve got a stack of books I haven’t yet read completely, most of them accumulated during 2018. At this point, I have to stop reaching for the New Shiny and relax, re-read, and revisit material I already have. It’s time to regroup and to deepen practices I’ve already encountered.

So it makes sense to usher in the new year with another round of Dagulf Loptson’s “Eight Days of Loki” ritual (from this book). However, I wanted to do things just a bit differently this time. I wanted to engage more of my unconscious so I decided to use my sand play toys and sand tray. I grab toys from the shelves and place them very quickly, without too much thought in advance. Creating the tray scenes is a way of manifesting unconscious thoughts, giving them physical form.

Day 1’s theme (above) is “magic” and involves a contemplation of fire. For me, that’s a contemplation of both inner and outer fire. I’ve been practicing a breath meditation technique that’s supposed to generate inner heat, but haven’t gotten too far along with it. My hands, though, have begun to tingle and pulse like crazy in the last few weeks, and to have a sense of pressure, as if I am holding hands with someone who is very warm. So that red jewel in the center of the left hand palm print is significant. I also felt like I was doing a “cave painting” of a handprint by pressing my hand into the sand. It felt like an archaic gesture.

Though I didn’t visit a graveyard on Day Two, as suggested, I did pour out an offering of pomegranate juice on the place in my yard where two newborn kittens are buried, poor things. I work with my ancestors on a daily basis, and it’s that sense of being surrounded by them that comes out in the tray, with the skull and skeleton impressions in the sand. The glowing pink/orange skull cup symbolizes Loki’s connection with cremation fire.

Day 3 is today. The theme is wealth, as in wealth of talent and possibilities. The idea is to make something beautiful and worthy that can be offered to Loki but writing is my main form of creative expression these days. For the tray, I chose the jeweled box and the golden egg plus a few “jewels” for the sand. Looking at this now, a few hours later, I see the box as what’s known and in progress and the egg as unknown potential. The red, faceted jewel links Day 1 and Day 2 together. Magic and creative wealth are two aspects of the same thing, perhaps. 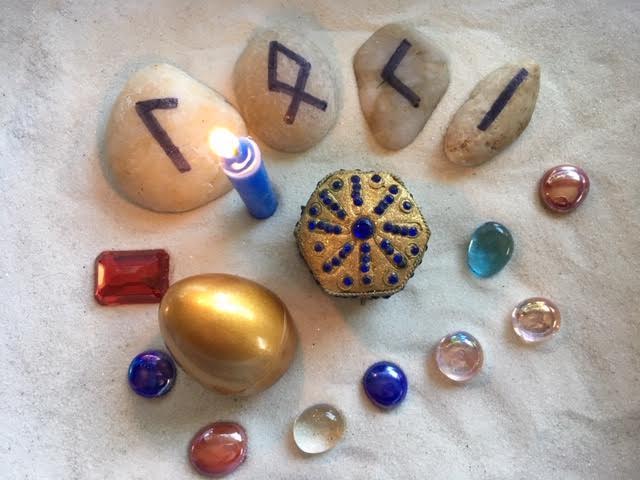 I’ll post the rest of the days as I go along, perhaps a couple at a time. I’m taking this slowly, taking time to savor.