Loki is great for my Positivity Ratio! I could never have dreamt I’d find such a rich source of positive emotions in the service (and the metaphysical arms) of a notorious trickster god!

This morning I woke up to find yet another clever Loki-themed meme posted on social media (I will share it at the bottom of this post). The meme caused me to experience immediate pleasure in the form of amusement–the kind I classify as “unholy glee”–as well as a feeling of an almost blissful love. That’s one of the many perks of being a Lokean–access to endless witicisms and scads of great artwork inspired by our favorite Norse deity (example at left) or his deft Midgardian cosplayer, Marvel Loki.

So, what is this Positivity Ratio? Psychologist and researcher Barbara Fredrickson, Ph.D., has found that we in Midgard need a diet rich in positive emotions in order to thrive. The minimum ration is three positive emotions to every negative one. I learned about Dr. Frederickson’s work through her free Coursera class on Positive Psychology. You can check your own emotional nutrition by taking her Positivity Ratio test online.

You’ll notice in the list below that “happiness” is not included in the list. It’s too vague. Instead, Fredrickson lists happy-making emotions as elements (nutrients!) that can enrich an emotional diet. The idea is, you can do this deliberately, just as you can choose to add vitamin supplements or a fresh salad to your daily menu. 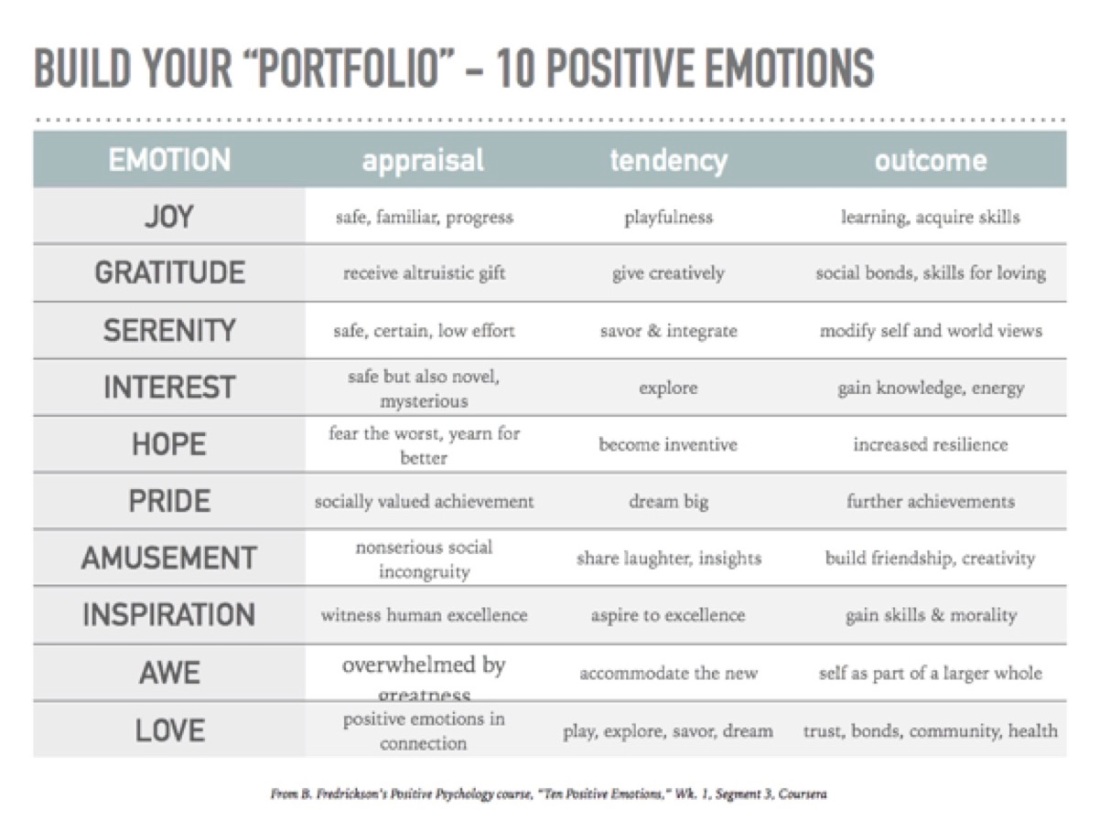 Now, when I took Fredrickson’s online course, I was in bad shape: I’d moved away from California and was desperately homesick, I was waiting for my divorce to finalize, a love affair had soured, I had developed a bad case of social anxiety, and so on. I was often alone, depressed, and hopeless. But when I encountered the above list, I realized that no matter how bad I felt, I could ALWAYS access Interest and Amusement. In other words, learning new things like magic (interest) and watching cat videos (amusement) could improve my mood, even if the improvement just lasted a minute or two.

Increasing the daily frequency of such emotions could–and did–build my resilience over time. Resilience is key.

I would say that Loki the trickster represents a deified personification of “Nonserious Social Incongruity” aka “Amusement” (among other things). I tried to get at this in a previous post, My Lord, I Offer Thee…Twisted Humor.

Through my devotion to Loki and my other deities, I access nine out of ten of the above positive emotions. Certainly I feel Love, Awe, Gratitude, along with Interest and Amusement. The only emotion that I don’t seem to experience in this context is Pride.

I never thought I’d understand what religious practices and beliefs did for people, but after a couple of years of my own daily devotions, now I think I do. Our imagined but not imaginary companions–gods, goddesses, non-binary deities, spirits, ancestors, etc.–present an opportunity to engage and enlarge ourselves through the above emotions as well as the larger beings we’ve contacted. I have a little more empathy now for people who are “high on Jesus” and those who have similar evangelical fervor regarding other deities. They think the rest of us are missing out on the bliss they experience. They don’t understand why others may reject their particular source (which they feel must be the ONLY source). They don’t understand that it may not be the specific deity or set of practices that provide that bliss, it’s the repeated, deliberate connection with something (anything!) larger that provides the emotions that eventually coalesce into a feeling of grace.

I should add that states of grace can be experienced through creative, intellectual, or generous actions–it’s not just a “gift of the gods.”

But for me, Loki is the fast track to all kinds of emotional goodies. When I wake up to a meme like this (based on Marvel’s Midgardian cos-player), I laugh, I feel glee, I swipe the meme and post it myself. I laugh at myself when I do it. And I enjoy people’s reactions. I am amused. And this improves my emotional diet, which can then be tracked via my positivity ratio.

This is just the beginning–sharing such emotional goodies with others is also a way to amplify them. That’s partly why our Lokean community is so vital. We can easily increase our Positivity Ratio by harvesting positive emotions through our Loki-related sharing.

It all makes perfect sense now.

9 thoughts on “Love and Unholy Glee: Loki and the Positivity Ratio”