Thirteen days into July’s “Thirty Days of Devotion for Loki,” we ponder this topic: “what modern cultural issues are closest to this deity’s heart?”

A deity’s interest in modern cultural issues is assumed and/or communicated based on a devotee’s blend of  “personal gnosis” and knowledge of lore, as well as community conversations about a deity’s involvment in a cause. These perceptions and community conversations are valuable as they give clues to types of service that could be performed as an offering to a deity. Of course, devotees may also received direct messages about desired devotional work as well.

For what it’s worth, here’s my personal gnosis take on Loki’s interests.

In yesterday’s Day 12 blog, I encouraged readers to attend one of the LightsforLiberty events protesting U.S. concentration camps for asylum-seekers. I claimed that “Loki loves children” and this claim was based on lore that he both fathered and mothered various progeny, appears to have been deeply fond of them all, and would presumably not want them or other children to suffer. And he doesn’t seem to be someone who would approve of caging them or separating them from their parents.

One example of Loki’s concern for a child’s safety comes from Loka Táttur, a story-ballad from the Faroe Islands in which Loki rescues a farmer’s son from a giant after Odin and Hœnir have failed to keep the kid safe. And many modern conversations about Ragnarok speculate about Loki’s desire for revenge on the Æsir after the torture, death, and banishment of many of his own children. (His own torture and banishment seems scarcely considered.)

I also have personal gnosis regarding Loki and his concern for the safety of children, and have seen many comments from other Lokeans who also share this feeling.

This is another area with plenty of conversation and personal gnosis. While you won’t find sexual preference and gender-variance positivity reflected in the old Norse lore (quite the contrary), I think there is plenty of modern agreement that Loki is multi-gendered and queer, and has a special interest and protectiveness for human beings who are in the same boat.

Several years ago, the “Over-Enthusiastic PFLAG Mom” was a popular meme. Of course, she’s a redhead. I catch a whiff of “Loki-ness” in the spirit of these memes. (My favorite reads “Pansexual? Just don’t chip the good china.”) Could “Mr. LokiBot” do any better? 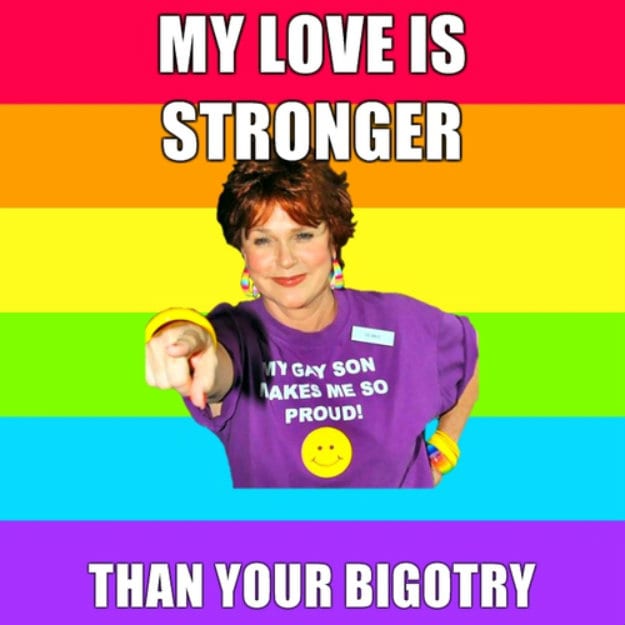 This is one of the main reasons I love him.

According to some parts of Norse lore, Loki has been tormented for eons by painful snake venom dripped onto his skin. I personally take this as a metaphor for the challenges of environmental illnesses. One of my first blogs was Loki: A God of Pleasure, Poisoned. I’ve expanded on this theme in My Gods are Fragrance-Free and Loki: Proving the Poison.  At times I identify as an “Eco-Lokean.”

(Sadly, when I went to the local Lights for Liberty demonstration in Lakeport, CA yesterday, I had to dodge at least two quite heavily-offgassing fragrance users while standing in the hot sun with other activists. Even protests are not accessible to people like me. And someone tell me why it is necessary to wear fragrance to a protest??? Bitch, please!)

Advocacy for People with Disabilities and Other Life Challenges

A number of people think and feel that Loki is very supportive of people who deal with physical and mental challenges, as well as those who have gone through rough times. He does seem to show up with a hand to hold and a swift kick to the patoosis, if you need it. Many say Loki brings some crazy-ass shit, but that they are better for it.

I would presume that any advocacy for people with disabilities, foster kids who have aged out, prisioners, poor people, homeless people, addicts, etc. would have Loki’s blessing.

Personal gnosis, as well as intellectual speculation, leads me to beleive that most deities and spirits of this planet, not to mention great heaping gobs of ancestors, are quite, quite concerned about accelerating climate change and species die-offs. However, those in charge of conservative Christian fundamentalists are anything but. They’re all like “inconceivable!” and “What–Me worry?” Will the real anti-Christ please stand up?

A Friend of Investigative Journalism?

I could also see Loki as a patron of investigative journalists and columnists who skewer hypocrisy and exposure wrong-doing in high places. He’d probably love Project Censored.  Perhaps I should start listening to their radio show again, and invite Loki to listen in. Check out “Rallying Over Balloting: The Origins of Activism of the Millennial Generation” which is also televised.

Now that The Troth has lifted the ban and welcomed Loki back into its Trothmoot ceremonies I think there is even greater potential for Loki to be seen and known for his/her/zir/their opposition to fascism and white supremacy. He can be a potent force for inclusivity. I made a case for this before. Here’s a list of anti-hate resources at the end of this blog from last year.

As for the juggernaut of facism, here’s an excellent article by Fintan O’Toole in Irish Times: Trial runs for fascism are in full flow. Babies in cages were no ‘mistake’ by Trump but test-marketing for barbarism. It was published last summer, 2018. It now forms an eery, prophetic restrospective.

Here’s another article worth noting, from the Southern Poverty Law Center: White Nationalist Threats Against Transgender People are Escalating.

Generally, whatever kind of humanitarian or social justice activism we’re into, if we’re into Loki too, we will probably be asking him to support us in our efforts. And we’ll likely  to feel he will, partly because Loki hates hypocrisy and partly because he wants us to be effective change agents for our own lives and for the larger community. That’s a personal gnosis statement, of course, but I believe it’s in alignment with most if not all in the Lokean community. And it’s in alignment with how I’m communicating with my patron deity.

(This thirty-day devotional format is based on a list developed by someone named Arrin, known as “a Gaulish polytheist.” It can be used for any deity.)