They say you “can’t go home again,” and yet this last couple of days I’ve had the closest thing to a prodigal return, though I was staying in a place I have never and will never live. I came down to the SF Bay Area on X-mas eve to be with my youngest, flu-stricken kid: a millennial living in a household that includes his father, and in the apartment downstairs, his brother. But everyone was away traveling, and Paul was taking care of the upstairs dog and the downstairs cat. He’d tried to go to the doctor the day before I arrived, but a $135 co-pay was impossible and he left. It was only after I assured him I’d pay for the urgent care visit that he went back and got the requisite medications (another $60 plus). Yes, he’s feeling better now but he still feels like junk and will for another several days.

So I barreled down the freeway on X-mas eve, with only my computer and a toothbrush (mostly), and with a mixture of longing and dread, once again called into action as a useful parental person. But I was also aware that I was going to be spending a couple of days in a household where I am not exactly welcome. (My divorce, though outwardly civil, still holds deep trenches of sorrow, regret, and resentment on both sides).

It’s unusual for this particular kid to admit to vulnerability with me–even though I’ve never been one to shrink from that–but he did say he felt scared by being so sick and all alone. Having my children want me still forms the apex of my bliss and so, you can imagine…

The home of a person who is very ill will often not be “company ready” and so I spent a few hours doing dishes and cleaning the kitchen once I arrived. It was fine. I was there to do that, to do for my kid what he was too sick to do for himself (and to make numerous cups of Throat Coat tea). But what was one part amusing and two parts freaky was the realization that I was handling many humble household objects that are familiar to me and/or that I chose and bought myself.

I’ve lately begun to take photos of my objects, because I am planning a book which tells their stories, and when I do that, I can let many of them go. Here I am confronted with objects that I left behind: some records, books, cups, bowls, cutlery. The knives my brother gave me when I married. The champagne flutes bought early in the marriage. The wooden bowls I purchased in the Japan Center hardware store, in the days when my kids attended Waldorf School and wood and wool were social requirements. And if these things I was cleaning weren’t things I owned and left behind, there were others that I’ve washed, dusted, and arranged over the years. What is it like for him, I wonder, to make daily use of these objects? To see them in cupboards and on shelves?

Perhaps he performed exorcisms by dissociating them from me, but I am not that capable. Objects speak or scream at me, their stories and place in my life are always connected with their use. Our children, however, are living links and I suspect that some efforts of erasure have also come into play in the last four years, not about him, but about me.

Sleeping in my husband’s room was a challenge. That bed, that dresser, those paintings, that stuff, the odor of tobacco over all. The same mattress, pillow cases, bedspread. The first night, I couldn’t get to sleep for the longest time. I was buzzing with the physical rememberance and energies of past pleasures and past pains. The deepest sorrows, the pile of resentments soaked into the sheets and the stuffing, the sad memories of a once-great love sunk into a swamp of conflict avoidance.

The second night I was more at peace. I could bless the past, bless our mistakes, bless the beings we have each become–no longer having enough in common to even be friends except in the most casual exchanges. We went separate ways long ago.

What baffles me though is the tarnished metal and red-bead “bellydance” belt of mine (dating from my tantra days) that he’s hung on the curtain rod in his bedroom, next to his bed. What does it mean? He has been in haste, previously, to give me boxes of “my stuff” that I left behind. But the belt–does he even realize it was mine? Or does he think it belonged to another? I have no idea, but seeing it makes a deep mystery. I don’t know if I should feel touched or not. Is it a form of silent communication? Is it something like the hands we held during family mealtime grace–the only touch for many years? 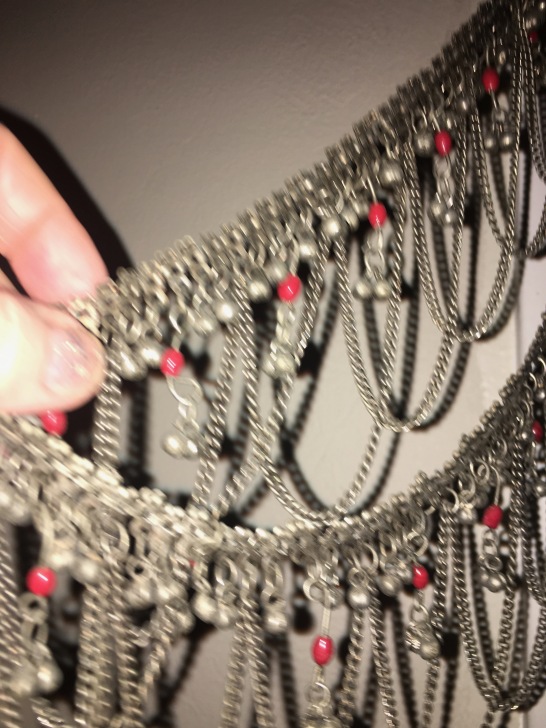 Is that tarnished belt in its unpolished state a communication or a commentary like the two paintings of his that I keep in my bedroom: the “Shade Tree” and the blue butterfly? Is it like the way I always say “my husband” and then have to add the “ex?”

Or is it just an off-hand gesture, placed there and forgotten, like the towel thrown on the bedroom floor or like the “Christmas” plates that he insisted on using throughout the year, diminishing (for me) their ceremonial specialness at this time?

In any case, I have left the kitchen cleaner than I found it. And I hope he perceives that as a “thank you” and not as a rebuke.