Happy Super Worm Moon and Spring Equinox, folks! On this first day of Spring, with a full moon in Libra, the rainclouds are hanging low over Mt. Konocti. It feels like winter again.

Now begins a blog series of not-exactly-analysis and commentary on the results of the Neopagan Spectrosexuality and God/Spirit Spouse Survey (see raw data charts). This non-scientific, completely confidential, volunteer survey drew respondents primarily through Facebook groups and posts. I was hoping for a wide-array of folks from the “big tent” of Neopaganism (e.g. the sort of people who attend Pantheacon, or would if they could). As you’ll eventually see, there was indeed variety in the kinds of deities, spirits, and practices reported by the 100 people who completed the survey.

Because this survey was limited to ten questions, I only asked two on demographics. I wish I could have asked more. 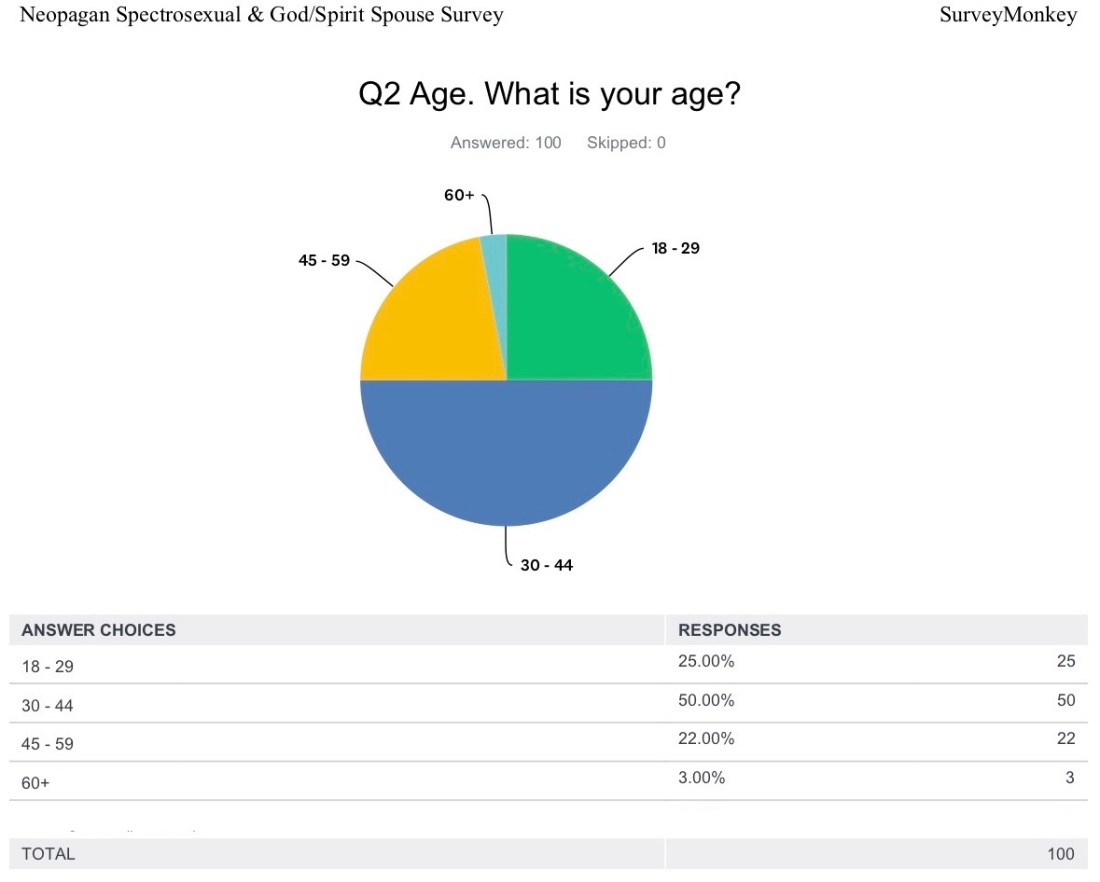 There is a perception in certain neopagan circles that people who claim to have had spectrosexual experiences and/or who claim to be god or spirit spouses are all very young people who overshare on Tumblr. This chart is almost a “hand basket of repudiation” to that notion. (I’ve always wanted to use that phrase in polite conversation…) As you can see, three-fourths of these respondents are “old enough to know better” (irony here) and yet still report incidents and relationships that other neopagans find eye-rolling.

Let’s face it folks, something is happening and not all of it is delusional.

About the only things I can note here are (1) the prevelance of cis women and (2) the sad lack of trans people as respondents (except for one trans man). I will also say that at least four more gender queer/non-binary people responded but they did not complete the questionnaire. I had to reject their responses as I needed 100 complete sets. How I hated doing that!

So that’s it for now. Enjoy whatever witchery you may be up to on this lovely Worm Moon. Next blog, more on the survey.