Cue up your favorite song. I said it was a party! Then click the banner link below to get your copy of Loki’s Torch, officially published today, August 1st, just in time for Lokabrenna (Sirius rising and the “Dog Days of Summer.”)

Update: By the way, in case you were wondering. Here’s a message from Ky Greene regarding the financial aspect of this ALL VOLUNTEER PROJECT: “Everyone who contributed got a free PDF. We only make $5 off every sale, which we are saving to be able to fund other events/products for the Lokean community as a whole. The rest of the proceeds go to MagCloud for their printing service. Since it’s a print-on-demand service, people are paying the printers.” 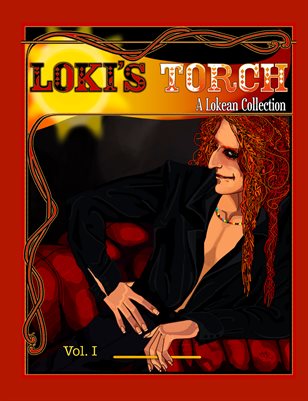 This is a great collection of devotional work from the Lokean community–artwork, poems, fiction, articles, rituals, and even recipes!

Print on demand or PDF. Published by Loki University.

This song’s going out to you, Loki!

Loki is the wild child, the consummate outsider, the charming iconoclast, the “everywhere but belongs nowhere” guy, a shapeshifter, a sky walker (“you can’t catch me!”)… So today’s question seems easy to answer at first: “how do you think this deity represents the values of their pantheon and cultural origins?” Snap! “He opposes them!” And then I pause, “but not entirely.”

Personal gnosis: I see and feel Loki more as a source of revelations than a figure who represents values or even anti-values. Though he does have a narrative function as the irritant, the villain, the anti-hero, the outcast, and even as a tragic figure–he holds up a mirror to the deities. Just by being who he is and doing what he does, he can throw their hypocrisy and cruelty into stark relief. If they continue to be obtuse, he’s willing to tell them to their faces. As we observe him in action, Loki reveals often ugly truths about the others (and sometimes unpleasant things about himself). He seems to say, “Watch and learn, O Midgard!”

And yet, as a Jotun “giant” adopted into the Æsir as Odin’s blood brother, he also seems to have been complicit, collaborative, and obedient–willing to serve as a functioning member of his new family. The bonds of kinship–including “blood brotherhood”–were very important in the culture of the old lore, but Loki is often troubled by family conflict. Dagulf Loptson says it very well: “when the two sides of your family are battling each other, which side do you align yourself with in order to fulfill your family responsibilities?” (Playing with Fire, p. 14). Loki’s family values are also challenged when his children are deliberately harmed by other members of the Æsir. And no one seems to have offered him weregild, either, as seems to have been the custom for making amends. (Personal gnosis: I feel no amount of that would have made it right for Loki, anyway.)

Another “value” that seems reflected in the old Norse lore, is what Dr. Jackson Crawford calls “hyper-masculinity” in his Lokasenna video. (I do think subtitling this “truth-telling” poem as “Loki’s Locker Talk” is somewhat superficial, however.)

Crawford translates one perjorative as “sissy” and Loki and Odin trade this one back and forth in the poem. Though Odin and Thor have both taken on the clothing and identity of women at times, Loki is the one accused most often of having a versatile gender repertoire, including a more subtle and nuanced masculinity. (Gender-shifting is one reason so many Lokeans are drawn to him, including yours truly.)

Lokasenna also seems to present sexual fidelity of women as an Old Norse value, as Loki exposes love affairs of the goddesses, including their love affairs with him. Therefore, Loki would seem to be subversive of this value, rather than an upholder of it. It’s obvious some of the other gods also subvert this value–via seduction or worse–not just Loki.

There is certainly much more that could be said on this topic of “values,” but I feel constrained today by lack of time. Perhaps I’ll revisit this again when these “30 Days of Devotion” are over.

First, select a piece of music. Play it for Loki. I tried this piece, as I was feeling slightly maudlin (I hate maudlin!). Then…

…Then you go to Inspirobot.me and ask “Mr. Lokibot” to comment on the song. This was what I got in response, no kidding!

After twenty minutes of laughing like a loon, I tried this song.

This was the response (below). Really, Loki, irony? Are you telling me you want something more au courant?

Okay… this next selection delivers a wee bit of irony from me to you, my ecotoplasmic darling Mr. Lokibot… You want au courant? I give you POPPY! (Last year’s song, but even so…)

I think I’m a gonna quit while I’m ahead…