What Loki wants, Loki gets, even if it’s not made by hand, even if it can be bought for ready money. Today is #LokiSpongecakeDay.

The source of this fondly remembered Holy Day is a Tumblr thread where someone took umbrage at a photograph of another devotee’s humble offering of a simple store-bought spongecake (shortcake) with strawberries and whipped cream. And then there were comments and rebuttals, boiling down to “umbrage up yours.” You can find the original 2012 “Spongecake” thread here.

We’re celebrating online today, so show up if you’re inclined. Bring your spongecake and some limericks. Or whatever. And be proud of your spongecake, whether it is handmade from artisan-sourced ingredients or grabbed off the shelf. It’s the thought–the devotion–that counts. Loki will be thrilled with the attention. 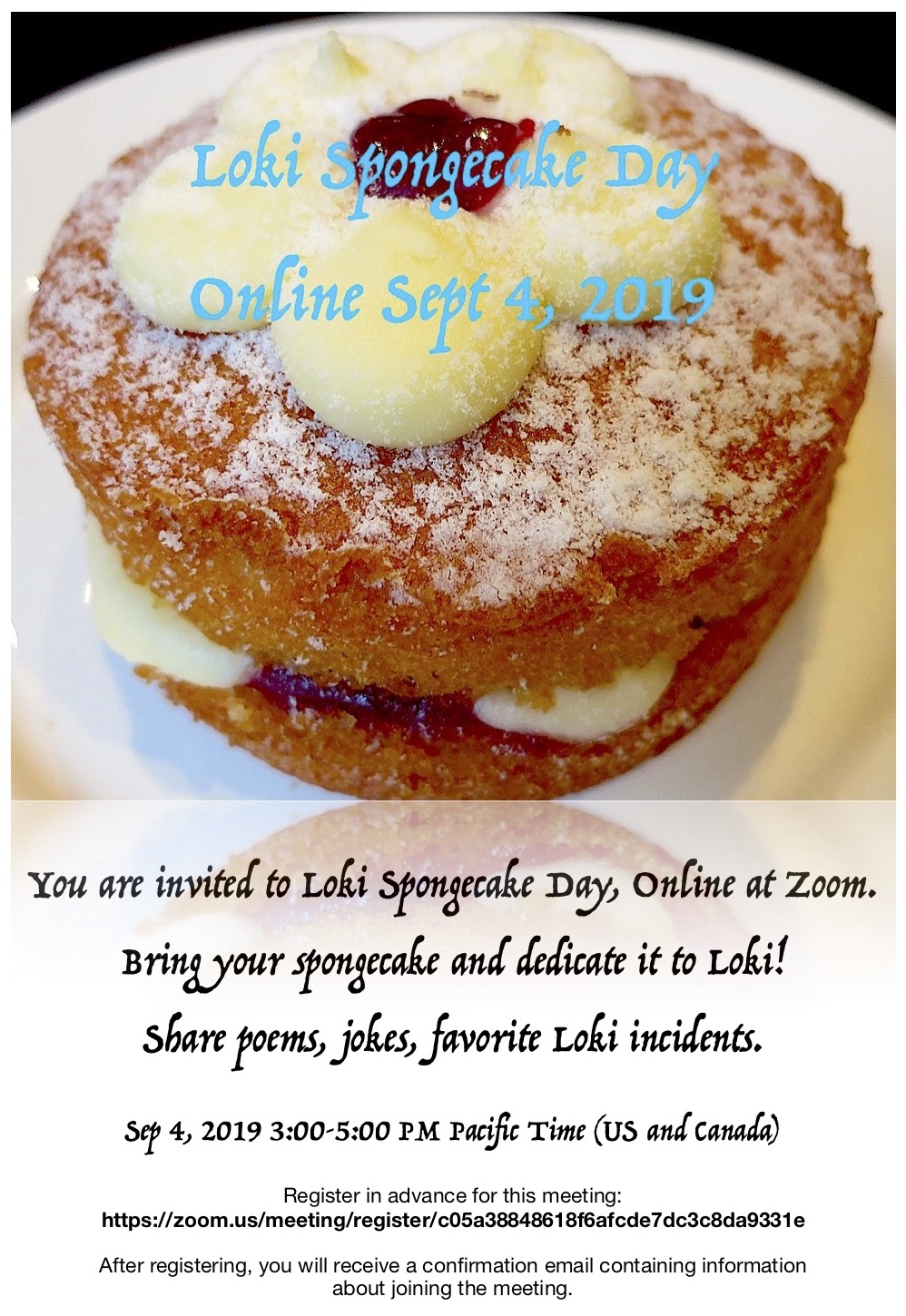 Today we consider “festivals, days, and times sacred to this deity.”

As far as we know, there were no old Norse traditions around holidays or worship of Loki. That doesn’t mean there weren’t any–much lore has been lost. It just means we don’t know. So what follows are completely modern inventions.

Loki as a god of liminal space/time may very well enjoy sunrise and sunset, but I haven’t personally encountered anyone yet who sets aside these times of day for Loki. It’s not a bad idea though.

Many people do weekly observances for Loki on Saturday, but in my case, first he wanted Tuesday and then he wanted Sunday as his “special day.” I don’t know why.

I don’t personally use this day to celebrate Loki as I don’t see him as “a fool” (quite the opposite) but others enjoy this day. And here’s a delightful song for it.

This holiday comes from the Pagan Book of Hours–The Breviary of the Asphodel Tradition. Lithemonath is “the month of Litha, the summer solstice.” I am not sure how widely it is celebrated outside the Asphodel tradition, and wonder if it is appropriate to adopt it as a generalized holiday for Loki.

I first came across mention of this holiday in The Jotunbok–Working With the Giants of the Northern Tradition by Raven Kaldera, 2006, Asphodel Press  (p. 277)

A note on the website’s homepage says the proper attribution is:

In the Northern Hemisphere, the heliacal (morning) rising of Sirius ushers in the “Dog Days” of Summer. This usually takes place late July or early August. Lokabrenna is a Nordic name for Sirius, the brightest star in the sky. It means something like “Loki’s Torch.” This year, in the Northern Hemisphere, the date of Lokabrenna’s first morning appearance is calculated as occuring on August 14th. I found the following information on this site. Here’s the relevant paragraph:

“During August, as Mercury makes a morning appearance, brilliant Sirius, the sky’s brightest star, makes its first morning (heliacal) rising just before sunrise. For the latitude on the diagram, about 41.7 degrees, this is August 14, 2019. For locations farther south, this occurs days earlier and later for latitudes farther north.”

[Note: 41.7 degrees is near the California/Oregon border.]

Somehow it seems appropriate that the date is ambiguous and based on when people first read and reacted to a certain Tumblr post, dated September 4, 2012.

I read about this day on the Lokean Welcoming Committee blog and if I remember correctly, it apparently started via an innocent Tumblr post about offering Loki a storebought sponge cake, with strawberries and whippped cream. Then someone took great umbrage, claiming this was an inappropriate offering (too storebought, too modern, whatever!). Then many other people said, “F— that! You can offer whatever you want and whatever you think Loki wants.” Voila! Loki Spongecake Day was born. I wish I could find the post where I first read about it, because it was a great telling of the story and I remember the phrase about turning this fracas into a holiday, “because that’s how Lokeans roll” or something to that effect.

In addition to Loki, the holiday celebrates a smart and snarky defiance of convention.

Many Loki devotees and enthusiasts celebrate anniversaries of oathing and/or godspousing as well as other dates that mark a special time with Loki.

Today, July 11th is my anniversary of oathing and asking Loki to be my patron deity.

October 28th will mark the first anniversary of the Lokabrenna Tiny Temple dedication.

People may also celebrate special holidays for various members of Loki’s family, but I haven’t covered that here.