I don’t have to tell you all, but this is a time of intense, scary weirdness. Here in the U.S., the pandemic is going to overwhelm our medical system and our “social order” (such as it is), thanks to the criminal ineptitude of our federal government. Many state and local authorities are more competent, but they are hampered by federal grandstanding, lack of money, lack of vital equipment, and federal budget shenanigans. And, unlike Germany,  where Chancellor Merkel assured her citizens that all will be cared for, many of us here in the U.S. are considered disposable. Our impending demise is supposed to be “good for the economy.” Now, that’s always been the case here–people who are marginalized, exploited and oppressed in the U.S. have always been considered disposable and many of this country’s policies have always been brutal and genocidal–but the Covid-19 pandemic shines a glaring spotlight on this shadow side of our national history and character.

People like me, who are old, now find we have an “expiration date,” a “shelf life.” I guess that’s one way to ransack the social security system, huh? Just kill off the older people and that’s more moola for 45’s golf games.

So, this is a time of tumult, suffering and uncertainty for all, on all kinds of scales. Personally, I have been totally alone since February 27th, with approximately five actual in-person human contacts since then. I live a reclusive life anyway, but I did cherish my ability to go to the grocery store now and then, or have a meal out, alone, with a book for company. Now I don’t dare. My cats are my dearest companions in this time, as everyone else I love is far away. I’m kind of holding on to a thread right now, hyper-alert to the sounds of traffic from Highway 20, a voice from the neighbor’s backyard, and the sight of the mist that travels over the mountain outside my window. However I do talk more to friends and family on the phone, or the internet. And I do know how lucky I am to have a roof over my head and some canned goods in the cupboard (though my toilet paper stash is low).

So, with all this happening, it was amazing to be graced with two magical miracles this month. On the same day, March 10th, two beings (of very different kinds) returned to my sphere. Both were important to me (for different reasons) and I thought both were gone forever.

For most of 2019 and the first part of 2020, I had been feeding and gradually taming an outdoor cat which I named Arya because she was such a tough little thing. She was a beautiful silver-grey cat with extra toes on her front paws and celadon green eyes. She had one clipped ear because she’d been spayed by the owner who’d abandoned her on my property (Meowington was another one of those cats). She became feral and fearful. I worked hard to earn her trust with regular meals placed near her lair in a wood pile, sitting near (but not too close) while she ate. She got used to me and I moved closer. Once she began to trust me, she began to enjoy my petting her while eating. She became a faithful creature, always watching for my appearance at the back door once dinner time approached. She was very punctual. And her confidence in me was precious.

By mid-January, I thought she was at the point where she might let me pick her up. (I wanted to get her into a crate and take her to the vet for shots.) I was also considering if I should bring her into my indoor cat family. (I have six indoor cats already and taking on a seventh might be too much).

But during the coldest part of January, a neighborhood tom cat began trying to chase her off around mealtimes. (He’s not a cat I feed.) Sadly, he succeeded. She disappeared for a couple of days and I tried to not worry. Then she showed up for dinner again at her usual time. I was so relieved! But the tom cat must have scared her away again because after that one meal she never came back. A neighbor told me she saw Arya one evening a couple days later but no one saw her after that. I would call for her during my walks, worried that she’d gotten stuck in someone’s basement or garage. Finally, I gave her up for dead–figuring a coyote or wild cat had killed her.

I grieved for Arya. I missed her more than I anticipated. So I was stunned and shocked when she appeared on the road outside my house on March 10th, near her usual dinner time. It was an incredible coincidence–I’d just gone outside to take the trash cans out. Arya was super-skinny and wobbly. At first she was too nervous to come to me. But a large bowl of canned food drew her near enough for me to touch her. I could feel every bit of her spine. She looked like she hadn’t eaten in weeks. I went indoors to grab a cat crate while she wolfed down the food. She was so intent on eating that I was able to scoop her up and plop her into the crate. This scared her of course. But once I had her indoors in the enclosed sun porch (somewhat separate from the rest of the house), she relaxed after a few minutes of panic. More food calmed her. I stayed with her as well, petting her until she felt comfortable.

(Bottom left, Arya before she disappeared. Middle, Arya half-starved when she reappeared. Right, Arya getting plump and healthy again.) 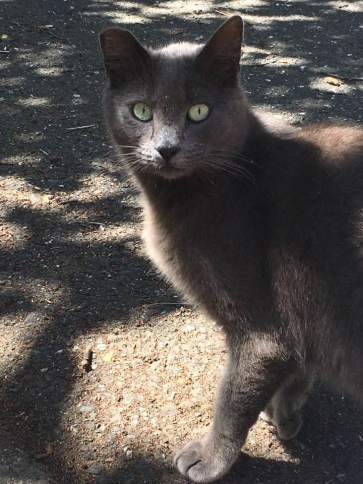 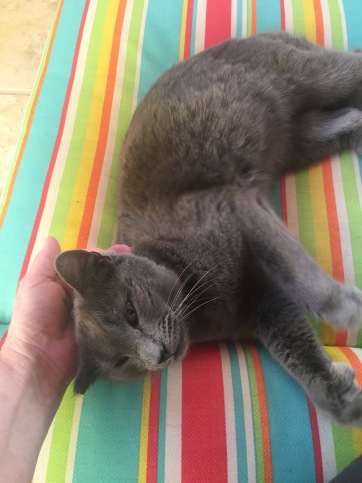 I’ve been caring for her ever since. One of the few times I’ve gone out in March was a trip to the vet, so she could get her shots and be tested for feline leukemia and HIV. She now has a clean bill of health, along with flea, tick, and worm treatments. She’s eating well and putting on weight. I have resolved to keep her indoors as the mean tom cat is still around. I am in the process of introducing her (carefully) to the rest of the cats.

Arya’s return is the first of March’s miracles.

And now for the second, which gives an important boost to my determination to use magic (and common sense) to get through this pandemic.

The Witch’s Primer course, offered online by Ariel Gatoga, was an important resource for me during 2016-2017, when I started my first Guild of Ornamental Hermits fantasy novel and began planning my move (my escape!) from Hawai’i back to California. I had stumbled across The Witch’s Primer on the internet and was quickly captivated by the material as well as Ariel’s voice and humor. Each class helped me to focus my energy and pay attention to self-care. In this way, Ariel became my first official witchcraft teacher. I have studied, and still study, other esoteric traditions and have had some wonderful teachers. However, I don’t think I ever enjoyed a teacher’s personality so much.

In addition to the Primer, I spent many hours listening to his lectures while preparing my house for sale (painting bedrooms, cleaning…). For months, thoughts of magic and magic practices permeated my house. I am not surprised it sold quickly once it was on the market. (FYI, A Charmed Life is one of my favorite lectures. I’m revisiting it again as I prepare for my next out of state move!)

Then Ariel dropped out of sight in the middle of 2017. There was no explanation. It was all very abrupt. I was very sad. I missed the teachings and his humor. I worried that some catastrophe had happened. And then I moved on–basing my subsequent explorations of witchery on other books and sources, yet weaving them in with what I’d learned from the Primer. Ariel’s teaching remained foundational as I began to develop a regular, eclectic practice.

Fast forward to March 10, 2020. Suddenly a group email appeared from Ariel Gatoga (I’d been on his previous mailing list). The email heralded his return, which now consists of a new website, links to all his vintage lectures (plus new materials) on a new YouTube channel, a Facebook page, and an Instagram account. And over the last few days, Ariel has been offering online Tarot readings (group and individual). I encourage all who are interested to visit his site and his offerings. I think you’ll be pleased.

As for me, I couldn’t be more delighted to have Arya the Cat and Ariel the Teacher back in my life. Magic is alive. Blessed Be!