I don’t know how this “has cats” (or “has” anything) thing got started but there it is. I “has” ’em, and I’m about to have more. My Lokean “Dog Days of Summer” have turned into a Nile Flood of Cat Rescues (all praise to Bastet!). (Note: previous sentence contains nerdy references to traditions pertaining to the rising of Sirius).

Now, I already have (below, left to right), the peerless Popoki, the sweet and skittish Niblet, the curious Freya, and Varda the Valiant. The last three, all rescue cats. Niblet was a tiny little thing found between two boards in a back yard in Richmond, CA, and was fostered by a dear friend. When I saw his photo on her cell phone I realized he’d be the new companion for Popoki. Niblet and Popoki went Hawai’i with me, and back again, and seriously–their cat airline miles can go to some other luckless feline because they are NEVER setting paw on a plane again. Ever. 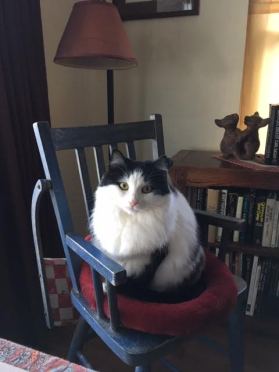 Freya was a just a kitten, dying of dehydration in the middle of Main Street in Upper Lake. She was scooped off the street and restored to health by a woman I’ll call Ruby, an exceptionally compassionate feeder and rescuer of cats. Ruby would not only feed the strays, but got as many neutered and spayed as she could, on her slim income. I met Freya in Ruby’s store, and I’d been thinking of getting a third cat, and suddenly here she was, in my arms.  Freya is the ultimate cat of curiousity–and a real diva besides. Popoki was slow to warm up to her (and still ignores her as much as possible) and Niblet (a male) was fascinated yet intimidated. Freya sits at my right hand, in the high chair my kids used to use, because otherwise she’d sit on my computer. Freya likes having her own throne…

Varda, full grown but only as large as a teenage cat, was a stray that inhabited the area under the office cottage I briefly rented in Upper Lake. She’s possibly a Bombay breed. She was being fed by a kindly construction worker and had become quasi-friendly. She’d had a twin brother, apparently, and the construction worker called them Jack and Jill. But one day the brother disappeared and the sister was left on her own. She still lived under the cottage and both the construction worker and I fed her. Then the cold winter winds began to blow. Little Jill became very ill, but was smart enough to actually go to Ruby’s shop for care. I guess the word on the street among Upper Lake strays was that Ruby was a dame with a heart of gold. (And that she was.) I told Ruby that if she could nurse the cat over the weekend, I’d get her to the vet on Monday and then adopt her. “Jill” became “Varda,” and after the usual two weeks of recovering from her respiratory infection and being sequestered in a spare room, joined my indoor cat family. (Varda is from Tolkien, another name for Elbereth, a goddess of the Elf pantheon.)

It took about a year for everybody to adjust to each other. Popoki, who has always been somewhat aloof anyway, still keeps to herself, mostly out of reach of the others. She’s over ten now and would rather ignore the social turmoil that Freya likes to create, because Freya gets in everybody’s face.

Meanwhile, Ruby had parked four of her cats in the woodshop that is now Lokabrenna Tiny Temple. She’d fallen on hard times, had to live in a tent on some land down the road, and wasn’t allowed to have her cats with her. Some stayed at her shop. This went on for a few months, then she and her partner decided to move across country with a van full of their other pets. At the last minute she asked if she could leave three of her cats behind, promising to send money for cat food every month. Well… I knew how that would go…but what could I do? Say “no” and have her take them to Animal Control?

So Meowington (my dear, late, lamented Temple Cat), Khu (a Siamese), and the nameless grey female with extra toes (now called Arya), were left behind. Khu was adopted by people across the street. Meowington stayed on the premises and ruled the yard until the baby rattlesnake bit him. Arya stayed in the rafters for awhile then suddenly bolted, living rough under boards and decks and in bushes for a year until I gradually lured her back into my yard with lots of canned food. (Meowington used to chase her off). So now Arya is my outdoor cat companion and likes scritches, petting, brushing as much as she likes the regular grub. Should I take her indoors? I don’t know how she’d do–she is as skittish as Niblet in some ways, and very independent. Popoki would probably despise her–and me–and Freya would probably bully her. Arya’s never wanted to go back into the woodshed/Temple and doesn’t seem interested in my house either. But we’re just about at that point where I will be able to pick her up, put her in a crate, and get her to the vet for shots (Crystal had had her spayed long ago).

And now everything is about to change. Keola (“Life”) and Kia’i (“Protector”) are part of a feral family from a trailer park in “K-Ville,” halfway around the lake. They are currently sequestered in that spare room of mine, recovering from their own surgeries. I had thought their ears would be clipped, as I intended them for yard cats, but they weren’t. Now I’m not sure what to do. I figured, being kittens, that Arya would be less freaked about them–and better able to keep her position as Queen of the Yard.

But here’s the rub. My compassionate friend in K-Ville, who has been caring for the mother and her four kittens ever since they showed up in her yard, can’t find homes for the other three–Mama Bitzi, another tabby female kitten, and a fluffy white Siamese male kitten. They are facing extermination. The trailer park has rules and there have already been complaints about too many cats, and cat poop in other people’s gardens. My friend has to do something quick.

I can’t stand the thought of these animals being put down. I have a very big yard, with outbuildings and a wild hill behind me. None of my neighbors will be bothered by cat poop (downside: bear, foxes, wild cats…). And I like the idea of keeping the family together as long as everyone is spayed or neutered. (I had a similar gig with a multi-generational feral cat family that ruled the yard around my house in Pahoa, Hawai’i. Before I moved back to CA, I got them all spayed and neutered and moved to an animal sanctuary–along with a large donation.)

Anyway…I volunteered to take the whole family onto the property. My compassionate friend will get flea treatment for the cats, and have the other two kittens spayed and neutered.

My only worry is Arya. I don’t want her chased off “her” turf again by a new group of cats. I’ve worked too hard, built up too much trust, to have her go back to living rough. I’m trying to figure out how to make the transition easier for everyone involved, especially her. Meanwhile, my indoor cats are wondering about the strange smells coming from the spare room…

I’m asking for special blessings from Freya (the goddess) and Bastet. I has cats. Boy, do I has cats.