To witches, no less. (Be not afraid, this is a writer’s metaphor, not “Lokean drama”…)

Oh, are you there? Pardon me while I decompress in public after the wild joy ride of National Novel Writing Month, which was certainly already intense enough. Just try producing a coherant stream of 50,000 words in one month! Those who have done this know what I mean! It can either leave you feeling like an Awesome God or Godette of Literary Potency or like a limp dishrag, or a bit of both.

But then all that Karl Seigfried Lokiphobia controversy gummed up this last week’s literary flow! I chose to engage though, and I’m glad I did! I became enraged! I made new friends! I shared moments of gleeful mirth! (And I have so much more to say on that topic, but later for that!)

First, a musical interlude. Wild One, Iggy Pop, ’cause I am literally dancing with joy and relief. (Did I ever tell you that story about that time I ended up on stage with the guy at San Francisco’s Old Waldorf, wearing a bright magenta space dress and hood and gold snakeskin boots? Or the time I drove a silly girlfriend of my brother’s over to the Miyako Hotel so she could try to sell him some… stuff…that’s now legal in California? Well, another time. Later for that.)

Oh my dear heavens, I am decompressing sumthin’ awful! But stay with me. This blog actually has a point.

I’ve mentioned before that this book I’m working on, The Witching Work of the Guild of Ornamental Hermits, is the second in a trilogy. The first, The Dire Deeds of the Guild of Ornamental Hermits, is set in the Puna district of Hawai’i Island (south of Hilo). The volcanic goddess, Pele, was very much behind the scenes in the book and in my life. I was living in her country when I started writing the first novel, and was learning to offer the chant Aia la O Pele. I actually pledged to read the entire first draft aloud to her, as an offering. I was on her land so it seemed only fair. And those nineteen months of exile were the loneliest and most depressing of my life. I felt so far from my children and the San Francisco Bay Area, my home. The book provided my most consistent cheer and focus.

Indeed, I was writing from my own burnt heart at that point–newly divorced and lonely as hell, surrounded by a nightly cacophony of coqui frogs chirping incessantly for sex— so what else could I do but birth a sassy community of witches and Elves nestled in an imagined intentional community deep in the Puna jungle? I was creating characters that I wanted to know, and Hermitville, place I wished I could live in. And just as the practice of magic entered the lives of my post-midlife crisis characters, so magic also entered mine.

Even back here in California I continued to read the first draft aloud to Tutu Pele. The book provided closure to the life I lived–as a junior Baba Yaga in my jungle house on stilts, surrounded by coconuts, hibiscus, wild orchids, feral pigs, and unleashed pit bulls. My characters also began to say their good-byes to the home they’d known for so long.

Now Pele is known as a sometimes “difficult” goddess, commanding great respect. In fact, seven months after I left Pahoa, the Leilani Estates eruption (May 3, 2018) began to take out acres of land and forest preserves, houses, the Wai’opae tidepools, the Ahalanui warm pond, the Hawaiian language charter school,  roads, and more–creating a massive crisis for the people of  that impoverished area. The massive lava flows continued for months. And yet the people in Puna remained proud of Pele and they rallied around each other with aloha, in a way that (now looking on from a distant shore) I envied.

My return to California shifted my focus from studying Hawaiian culture to continuing my studies of Western magic. I felt a strong call to begin working with my ancestors. And I began to feel my way into the Norse pantheon. I began with Frey, then Freya and Gerda.  Loki was not on my conscious radar then, though looking back I see his influence in my life, going back decades. I wish I’d known then what I “know” now!

And then, bam. He began tugging at my attention during a bitter crisis. Suddenly Loki and trickster references were everywhere, from pop culture to things I was stumbling across in my reading. Really very present, even in my astrological chart. This was much more up close and personal than even my fleeting “encounters” with Pele, who up to then had provided the most nearly “real” spiritual experiences of my life. (Someday I might write about those too–a story for another time.) As a result, I began serious, daily, devotional practices and reading. I probably was a little too quick to oath myself to Loki, but it seemed right at the time and I have no regrets. I do realize now that it was a bit of a hasty, newbie thing to do.

Given all this–and the fact that I started NaNoWriMo month with two Dagulf Loptson Loki rituals (here and here)–I should not have been surprised when Loki jumped right into the start of my second book, dominating the first few pages and now driving much of the story line. He’s right there, a fictionalized version named Lucky LaFey, along with my characters, the mortal “Hermits” and the Elves of The Realm. They’ve set up a new Hermitville right here in Lake County and have a new supernatural villain to defeat. I’d originally imagined a different plot line with this second book, but what’s happening now fits beautifully. It’s much stronger than my original plot concept.

In fact, last night, I took a deep breath, on the day before the close of NaNoWriMo, and because I was about to write a chapter from Loki’s perspective, in his first-person voice, I asked for some contribution from him, to come through me into the chapter. I wanted to get it right, you see. I felt that this was somewhat edgy–I’ve never taken such a step, so I took care to set time limits and “boundaries,” not knowing what to expect.

What happened was, the chapter flowed. What had been stuck now moved. There was no dramatic channeling or “horsing” or anything of that nature. But I felt close to him and wrote from the inside out with that feeling. He was/is my active muse.

And yes, I read the whole of the first book to him, aloud, and now I’m reading my draft of the second. It’s a satisfying sort of offering to make.

“Loki as Muse” doesn’t get nearly as much attention as he should. Someone should create an encyclopedia of this god’s cultural, creative, literary, and musical impact. From the old surviving Norse lore, where Loki drives a lot of the stories, to modern opera, movies, comics, visual art, fiction (including fan), costume design, pop music, and more. An encyclopedia would be a brilliant project, actually!

Since entering “Loki Land” I’ve been so impressed with high quality artwork, crafts, and writing–from blogs to books. And of course I enjoy Marvel Loki, which is a witty twist on the traditional mythology (even if it is fairly distorted).

I find myself less and less aligned with statements that equate Loki with “chaos” (as in the popular sense of meaningless, destructive disarray). I’m not saying he’s never chaotic, negative, or “too much,” but that there also seems to be a bandwidth that I would describe as “catalytic” and transformational instead. It may be that artists and creative souls are more “at home” with Loki, as they may be more used to playing in realms of quick connections, influences, passions, and intellectual and spiritual epiphanies. With Loki, stuff swirls, dances, glances, and recombines.

In other words, along with the other roles that Loki plays in my life (adopted ancestor, teacher, patron deity), Loki-as-muse is positive, challenging, and hella fun. And he gives me courage to write and birth magic from my own burnt heart. Hail Loki!

Finally, here’s my #NaNoWinner2018 certificate, just because I want to boast a little. As you might have guessed, this book will end up as an offering to him, just as the first book will have a dedication to Tutu Pele.

Oh, and that “birthing witches” thing I said? Aside from my twelve fictional, magic-wielding “Hermits,” one of my kids is actually a witch. My other is more of an entheogens fan though. Who knows what he’ll get up to later on? 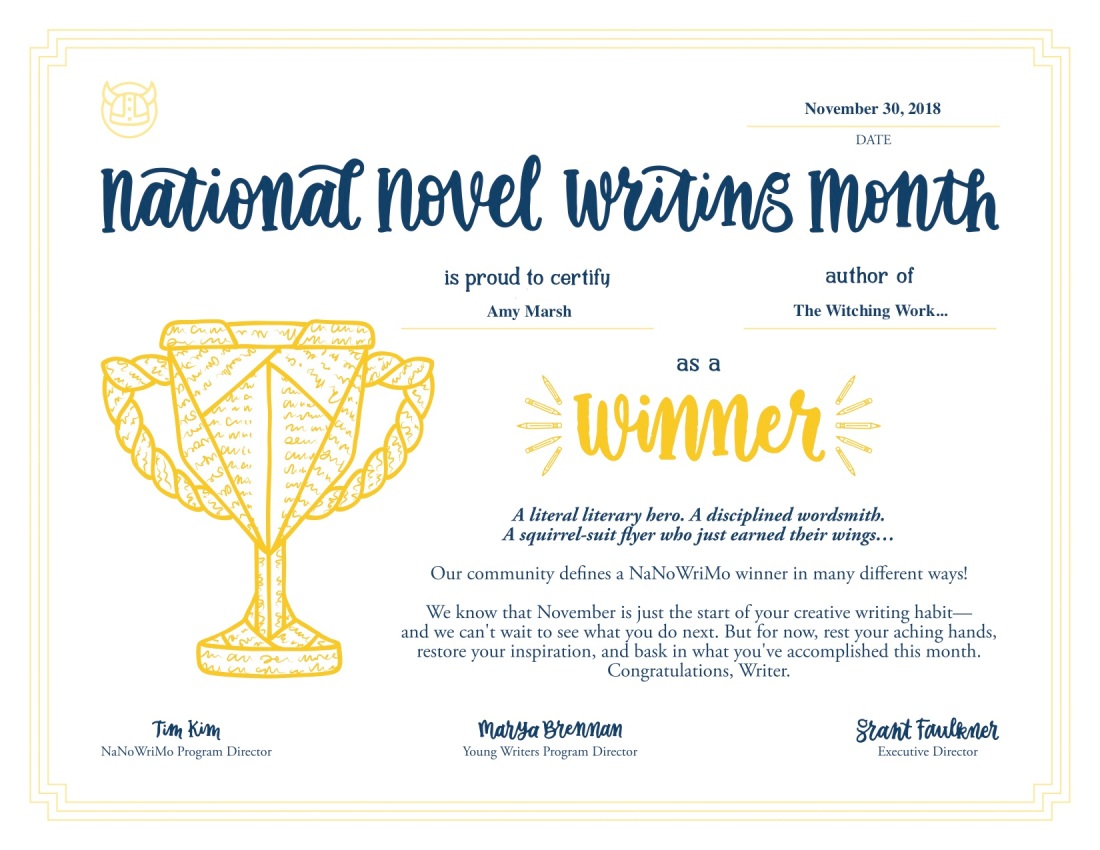